Last year, I moved to the Garden Route so that I could find a place of quieter contemplation and endless beauty.

Then, this past week I found something greater – a place of stalwart, kind people who have determination and generosity of spirit, unequalled.

The fires that tore myriad paths through the coastal plain changed a place of unmatched beauty into an enormous ash pit. Homes obliterated, properties razed to the ground, families fleeing, pets gathered into arms and buckets and boxes, vital documents snatched from safe places, clothing stuffed into pillowcases, cars loaded up, buses sent in convoy from nearby municipalities, firefighters squashed onto flights from other metropolitan areas, trucks bearing drinkable water and babies’ nappies.

Volunteers standing in vast warehouses or parking garages, lining up a thousand parcels with necessities. Willing hands sorting clothes into the right sizes, age groups, male or female. Sacks of dog food, packs of cat food, vans loaded with teff and feed for horses – who were then shoved into horseboxes and turned out onto school playing fields to graze along the touch lines…who knows, there might be a clutch of ‘Fire Foals’ in eleven months time?

Rich and poor, male and female, young and old, sitting side-by-side in smart hotels, being fed by willing staff – who were still trying to accommodate overseas guests who’d booked their stays months ago. Tourist accommodation destroyed. Hordes huddled at the edge of the Knysna lagoon, shivering with cold and shock, staring back at the land as they saw familiar neighbourhoods outlined by searing amber flames many metres high.

Firestorms tracking horizons, thick smoke like the spill from a careless artist’s palette, blotched above. Familiar landmarks silhouetted as if a child had done a pretty cardboard cutout for a festival card. Cars turning back in confusion as they crested a hill to see that what they were fleeing towards was worse than what they were fleeing from. 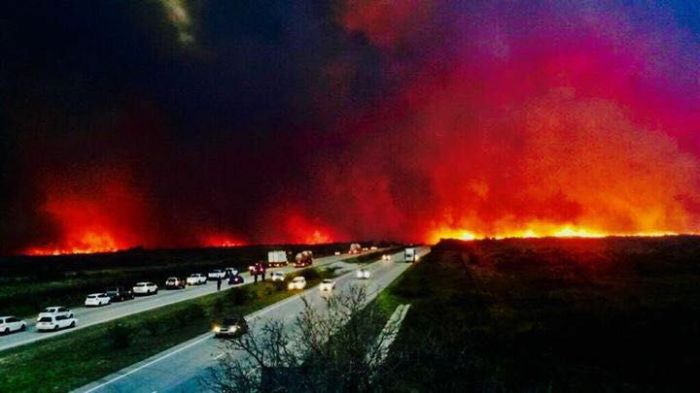 Firefighters hauling hoses “over the top” like soldiers fighting trench warfare of World War 1. Grizzled volunteers, sinews and muscles straining as if carved from wildsvleis biltong. Young women, smiling in triumph as they unravel hoses from newly-arrived firetrucks.

Sooty faces, tears of exhaustion, cracked lips, eyes burning, heads bowed. A quick drink after a ten-minute respite under a tree, then back to the front to face the “beast with one hundred arms”.

In towns nearby, trucks arriving after a night on the road to offload donations from large retailers, courier services bringing in medical supplies, animal welfare societies clearing space for animals coming in from the afflicted towns. Internationally-connected organisations gathering funds both locally and overseas, signs and notices at local shops asking for specific items for donation – water, energy drinks, chocolates, lip balm.

And above it all, the wind howled like a deranged banshee, a gleeful demon breathing life into the flames and fanning them along at speeds unimaginable. Trees uprooted as if they were pesky weeds, banners and signs slapped down like cards in a deathly game of poker. Flames dancing a flamenco across the national highway, clapping and stamping into the drought-stricken fynbos so that one of the few ways to get to the stormfront was blocked.

It isn’t over yet. I may be writing part two at some point, but I’ll say this: South Africans know how to pull together. We did it before. We can do it again.

Those politicians and poseurs who flit around in the upper atmosphere of the fuck-you-stocracy? Look at this and learn. Push the average person right to the brink – or beyond – and you will find they are made of granite and love, grit and concern.

DONATIONS CAN BE MADE TO:-
(Please message me if you would like your organisation added to the list below)

Random thoughts of a happy brain damaged ex actress… Me!

Birds of the Southern Wild

Photographs and observations by Ray Hartley

Why Evolution Is True

Why Evolution is True is a blog written by Jerry Coyne, centered on evolution and biology but also dealing with diverse topics like politics, culture, and cats.

An early exit to the Glue Factory

An American in Quirky Johannesburg

Diary of a new life in Africa