There’s nothing I like more than seeing something that makes me laugh or really think about what took place…and sometimes I stare in amazement! My arrival in the Garden Route has been punctuated by a series of these moments. 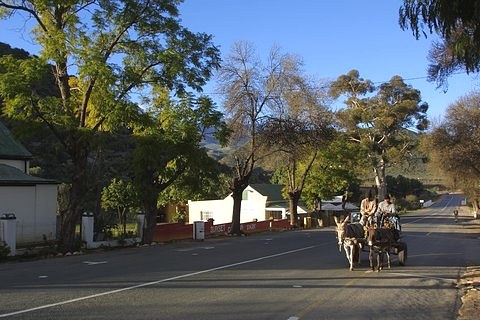 On the second or third day here, we were confronted by a donkiekar trundling the streets of George’s suburbs, sifting through residents’ rubbish bins and garbage. In Joziburg™ there are waste pickers too, but the guys on those operations pilot ricketty trolleys that look like they’ve been salvaged from a warehouse yard. Self-drive and potentially lethal when they steer them down steep hills, fully loaded. Meanwhile, George operates at a more gentle pace.

Then there were the two gentlemen, in York Street the other day, who had stripped off their shirts and were engaged in a serious bout of fisticuffs in the parking lot of a small shopping centre. Security guards looked on, benignly. I have no idea what prompted it, but they were quite clearly frustrated with each other.

At the Pacaltsdorp offramp from the N2, two tractors in the middle of peak traffic. No one blinked.

A Friday afternoon, in the village, a young man strolls along the pavement, strumming a guitar and serenading no one in particular. Further down the road, three girls swoop around and across the street on their bikes. Traffic? What’s that? One is dressed in her best frock and shoes. Clearly, cycling with friends is a proper occasion.

Outside Pick ‘n Pay, friends exchange news, asking about someone whose baby is a tad overdue. It’s easy to park, just pull into the slot right outside the door of said Pick ‘n Pay. Across the road in the neat and green park, some people have fishing lines in the river. Dinner, or maybe just a way of kuiering for a bit.

Oh, and it is true. Awê [ah-weh] really is a valid greeting if you’re conducting a conversation across the main street. Joziburgers™ tend to make a joke about Cape slang, implying it’s an affectation or a mockery. It isn’t. Awê.

On the road out of Blanco, there is a berry farm. Yes, a real farm where you can go pick your own real berries of all kinds. The only berries I’ve ever picked have been from the fruit section at Woolies!

Last week, we saw a whole field of mielies being harvested – indeed, they do not come clad in cling wrap, or from the trolley of a mielie lady. The following day, that same field was being ploughed under.

The pair of donkeys, creating another generation of donkeys, right next to the fence alongside the road. A black cow, on the farm in the village, that seems to stay in one place in the field, day after day. “There’s that cow again!”

And then: Manners. Politeness. People here will always greet you, even if you’re at the stop street with your window wound down, waiting your turn to go. The pedestrian who is crossing will say hello. The checkout lady will say hello and “wannabeg” [do you want a bag]. Mind you, even when your car window is closed, you will be greeted by a small wave or a tip of the head from a passerby. At first, I kept looking back to see who the recipient was…until I realised it was me.

Farmers, in their bakkies, parked either side of the road, having a chat across the sleepy R102 from George to Great Brak. They’re in shorts and big boots-with-socks, wearing tracksuit tops, and mashed hats on their heads. I wave. They do too.

People want to talk. To chat. To natter. I have found my home! Haha. I know I am notorious for simply yakking to anyone who seems to be a likely target; well, now I am a target too. It’s really nice!

Guinea fowl in our little enclave. Kê-kê-kê-kê whenever they get skrikked and take off like feathered rugby balls. Vast flocks of cattle egrets that fly over at random times. Forktail drongos with a sweet call that belies their clumsy name. Francolins pecking alongside the road. The cheeky robins and wagtails that tease our cats. The waterfowl in the dams on the way to town. Sacred ibis digging in the marshy bits. Hadedas everywhere. Grey herons stalking grandly amongst the reeds. The odd raptor glaring from the top of a tree [note to self: start looking hard at Robert’s Bird Book].

On the beach: seagulls shitting everywhere. Terns (I think), crying across the lagoon, then freaking out when we get too close. In the shallows: barely visible, tiny fish darting in and out the shallows – instant fish pedicure if you have the patience to sit motionlessly and wait for them to find out if you’re edible… Hermit crabs fighting over who has the right to the bigger shell. I never see the end of that because something always disrupts the altercation.

In the house: oh my…the blackest, shiniest scorpion I’ve ever seen. He’d been clinging to my camera bag (or sheltering under it) and got dumped on the chair. I thought he was plastic at first. Not. Mild panic, fetch a glass and some cardboard, send him on his way over the wall.

Ants. Ants. AntsAntsAnts. To the point where our pets won’t even touch their food because the ants are capable of building ant bridges over the water that is supposed to protect the food. I surrendered to buying an ant trap. Either the ants die or my pets starve. No contest.

Shongololos. I love them. These are small buggers, though. But you have to jump a bit if you look like you’ll squish one. I prefer them whole, not mashed. They can be found everywhere in the house.

Ticks. Farksakes. Ticks. The worst of the lot. The dog went a-wandering last week and obviously visited the tick maternity ward on the hill. Unbeknownst to us, he brought several dozen little ‘pets’ back, and left them all over the duvets. Small dots of ‘black pepper’ all over the cotton. Yack. Yack. Yack. We brushed the dog until he was rather angry at the excessive attention. We washed the bedding. We vacuumed like demons. Tea tree oil has been spritzed everywhere, and flea-and-tick drops administered.

Oh, and then there’s the golden orb spider. But she knows her place. Outside. Strung between the potato bush and the abelia. She’s wise…stay out of our house and we’ll stay out of hers.

Random thoughts of a happy brain damaged ex actress… Me!

Birds of the Southern Wild

Photographs and observations by Ray Hartley

Why Evolution Is True

Why Evolution is True is a blog written by Jerry Coyne, centered on evolution and biology but also dealing with diverse topics like politics, culture, and cats.

An early exit to the Glue Factory

An American in Quirky Johannesburg

Diary of a new life in Africa